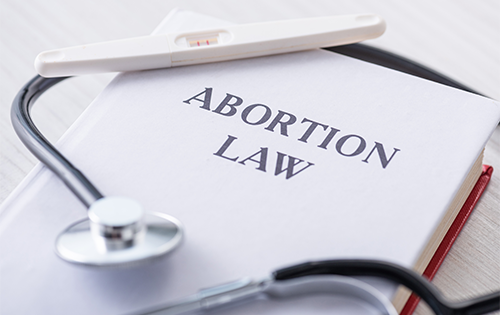 When you strip away the partisan politics and individual religious beliefs, abortion ultimately is a health care issue. And, in light of the United States Supreme Court’s recent dismantling of Roe v. Wade, there may be no health care issue that is more confusing than that of the legal status of abortion, especially in West Virginia. In today’s Health Care Law Blog, we will take a look at the current state of West Virginia’s abortion law, and we will consider how an abortion ban may affect a woman’s right to utilize prescription medications approved by the United States Food and Drug Administration (FDA).

On June 24, 2022, the Supreme Court released its decision in the case of Dobbs v. Jackson Women’s Health Organization, overturning Roe v. Wade and effectively eliminating any federal right to abortion arising out of the United States Constitution. The Dobbs decision shifts the right to make decisions regarding abortion availability, and legality, to the states. In the lead up to Dobbs, 13 states – Arkansas, Idaho, Kentucky, Louisiana, Mississippi, Missouri, North Dakota, Oklahoma, South Dakota, Tennessee, Texas, Utah, and Wyoming – enacted “trigger laws” that would automatically ban medically unnecessary abortions in the event of the overturning of Roe v. Wade. In West Virginia, however, the Dobbs decision did not trigger any newly enacted law(s). Rather, it left us with the potential reversion back to an abortion ban passed by the Virginia Legislature in 1849, before West Virginia was even a state.

“Any person who shall administer to, or cause to be taken by, a woman, any drug or other thing, or use any means, with intent to destroy her unborn child, or to produce abortion or miscarriage, and shall thereby destroy such child, or produce such abortion or miscarriage, shall be guilty of a felony, and, upon conviction, shall be confined in the penitentiary not less than three nor more than ten years; and if such woman die by reason of such abortion performed upon her, such person shall be guilty of murder. No person, by reason of any act mentioned in this section, shall be punishable where such act is done in good faith, with the intention of saving the life of such woman or child.”

On July 8, 2022, in response to the Dobbs decision, President Joe Biden signed an Executive Order seeking to protect access to reproductive health care services and urged Congress to restore the protections of Roe v. Wade through the enactment of federal law. Through the Executive Order, President Biden directed the Secretary of Health and Human Services (HHS) to take the following actions and submit a report to him within 30 days on efforts to (1) protect access to medication abortion; (2) ensure emergency medical care; (3) protect access to contraception; (4) launch outreach and public education efforts; and (5) convene private pro bono attorneys, bar associations, and public interest organizations to encourage robust legal representation of patients, providers, and third parties lawfully seeking or offering reproductive health care services and to protect the right to travel out of state to seek medical care.

In the meantime, however, in the absence of Congressional action, it remains up to the individual state legislatures and courts to determine abortion issues. In recent weeks, West Virginia has been busy on both fronts. On July 18, 2022, Kanawha County Circuit Court Judge Tera L. Salango granted a preliminary injunction in a lawsuit filed by Women’s Health Center of West Virginia, the state’s only remaining abortion provider. In granting the injunction, Judge Salango ruled that Code § 61-2-8 is “too vague to be applied” and that, in the absence of action by the court, Women’s Health Center and its patients, “especially those who are impregnated as a result of a rape or incest” would suffer irreparable harm. In response to the Court’s ruling, Attorney General Patrick Morrisey announced that his office would immediately appeal the decision to West Virginia’s Supreme Court of Appeals.

Women’s Health Center had suspended abortion services on June 24, fearing the Dobbs decision opened the doors for the clinic’s staff and/or patients to be criminally prosecuted under Code § 61-2-8. In support of the request for injunctive relief, Women’s Health Center argued that abortion is essential health care and that the old law has been voided (1) because it has not been enforced in more than 50 years and (2) because it has been superseded by numerous, more modern laws regulating access to abortion. Women’s Health Center insists that these subsequent laws, although consistently geared toward limiting the circumstances under which an abortion can be performed, nevertheless acknowledge a woman’s fundamental right to the medical procedure. For instance, West Virginia passed a law which allows abortions until 20 weeks in 2015, and, during its last regular session, the State Legislature passed a law allowing for abortion provided that the reason for the abortion was not related to the diagnosis or discovery of a disability or chromosomal abnormality in the fetus.

During this same time, Governor Jim Justice called lawmakers back to Charleston for a special legislative session and charged them with the job of “clarifying and modernizing” West Virginia’s abortion laws. West Virginia is just one of two states that reconvened a special session to consider restrictions on abortion following the U.S. Supreme Court’s ruling in Dobbs. During the first phase of this special session, the legislature’s Republican supermajority worked, without success, to come to a consensus on a bill that would ban abortions with some exceptions, leaving the procedure legal in West Virginia – for now.

House Bill (HB) 302 sought to significantly curtail access to abortion in the state, prohibiting abortion at any stage of pregnancy, with exceptions for a “nonmedically viable fetus,” a medical emergency, or an ectopic pregnancy. It sought to define “medical emergency” as a “condition that so complicates the medical condition of a patient as to necessitate an immediate abortion to avert the patient's death or for which a delay will create serious risk of substantial and irreversible physical impairment of a major bodily function, not including psychological or emotional conditions.” Much of the debate between the Senate and the House focused on the inclusion of exceptions for cases of rape and incest and the limited timeframes during which such exceptions might apply. HB 302 also sought to repeal Code § 61-2-8 while reenacting the old law’s criminal penalties (up to 10 years in prison) for medical professionals who violate the abortion ban. Under both versions of the bill, miscarriages, stillbirths, in vitro fertilization, and medical treatment that results in accidental or unintentional death of a fetus, are not considered abortions. The legislation would not prevent the sale and use of contraceptives.

While the Legislature is expected to resume its work on an abortion ban when it reconvenes its special session in August, questions will remain regarding any state’s ability to prohibit women’s rights to access FDA-approved abortion medications. In 2000, the FDA approved the use of the medication mifepristone, to be taken with misoprostol within the first 10 weeks of pregnancy, as a safe and effective method of inducing an abortion. This combination of medications is commonly referred to as the “abortion pill,” and, now, in the aftermath of Dobbs, the critical legal question is whether state governments have the power to ban the use of this federally-approved abortion pill.

Within the law, there are often instances in which federal and state laws conflict. When these instances occur, the doctrine of preemption holds that the federal law preempts the state law, based on the Supremacy Clause of the United States Constitution. Still, there have been other incidents where states have attempted to ban medications approved by the FDA. For instance, in 2014, Massachusetts tried to ban the use of an FDA-approved opioid painkiller called Zohydro. In that case, a U.S. District Court rejected the Massachusetts ban on Zohydro, stating that federal law preempted the proposed state action and that the state was obstructing the FDA’s constitutionally mandated charge of determining which medications are safe for Americans to use – and for health care providers to prescribe and dispense – as part of the health care process.

While we all await the resolution of these important health care issues, it is important to remember that Bowles Rice LLP maintains experienced Health Care and Government Relations practice groups to assist health care providers in answering their most difficult questions, in avoiding unnecessary legal entanglements, and in ensuring that their voice is effectively heard by state policymakers.

For more on this and related topics, see posts from fellow Bowles Rice attorneys Gabriele Wohl (The Crime of Miscarriage and Abortion) and Hannah French (Constitutional Rights and Estate Planning).