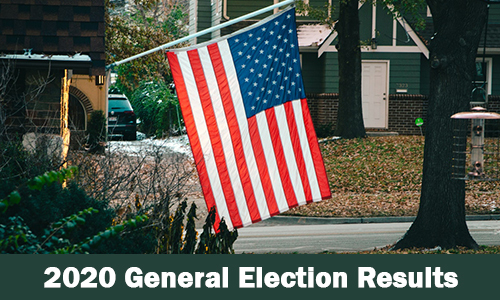 Citizens across the state and the country went out in record numbers last week to vote on the federal and state candidates of their choice. The results were significant to say the least.

At the national level, turnout for the 2020 Presidential Election hit a 50-year high, with former Vice President and President-elect Joe Biden appearing to have a narrow, but insurmountable lead. While the country waits for the machinations of potential legal challenges and recounts to play out, much of the national focus has shifted to the two U.S. Senate run-offs in Georgia which could ultimately decide the balance of power in the Senate. West Virginia could find itself in the catbird seat in a nearly evenly-divided U.S. Senate, as moderate Democratic Senator Joe Manchin could stand as a roadblock to some of his party's national policy proposals. Just yesterday, Manchin came out against both court packing and the elimination of the filibuster, creating doubt as to whether such measures could pass in a 50-50 U.S. Senate with Vice President-elect Kamala Harris casting a tie breaker.

While the federal government remains, perhaps, as divided as ever, West Virginia’s state elections served more as a red wave with Republicans winning the vast majority of seats up for election.

The wave started at the top of the ticket as U.S. Senator Shelley Moore Capito and Governor Jim Justice both won in West Virginia with large margins against their Democratic challengers. Republican candidates also swept the remaining seats on the Board of Public Works. Auditor JB McCuskey, Attorney General Patrick Morrisey, and Agriculture Commissioner Kent Leonhardt all won reelection, while former House of Delegate member Riley Moore defeated longtime Treasurer John Perdue. Treasurer Perdue was seeking a seventh term as State Treasurer, having presided over the office for the last twenty-four years.

In the West Virginia Legislature, the Republican majorities in both the State Senate and the House of Delegates grew considerably with both chambers now having super-majorities. Based on the unofficial election results, the current breakdown in the House of Delegates appears to be 76-24 in favor of the Republicans — a net gain of +18 seats. In the much more hotly contested State Senate, all of the high-profile races fell into the Republican column for a net gain of +3 seats and a super-majority of 23-11. This year’s legislative races brought millions of dollars in outside spending, with much of the focus directed at incumbents like Senators Ryan Weld and Patricia Rucker – the Senate Judiciary Vice Chair and Education Chair respectively. Both ended up winning re-election.

With Senate President Mitch Carmichael’s defeat in the Primary Election to now Senator-elect Amy Nichole Grady (R-Mason), attention will now turn to the selection of a new Senate President over the next several weeks. The new legislative caucuses typically meet in early-to-mid-December to select their leadership for the upcoming legislative session.

Regardless of the leadership outcome, one practical impact of this year’s legislative gains is that both chambers now technically have the 2/3rds votes needed to suspend rules in either chamber or to initiate the constitutional amendment process through the enactment of joint resolutions, followed by a subsequent vote of the public. These numbers could be critical as Governor Justice and House Speaker Roger Hanshaw have already discussed reforming West Virginia’s tax code.

While newly-elected legislators may be chomping at the bit to get started on introducing bills, they’ll have to wait at least a little bit longer. This year’s legislative session won’t fully start until February 2021 due to the gubernatorial election. The extra month may be a welcome delay, as it is unclear exactly how the 2021 Regular Session will operate in the midst of the COVID-19 pandemic and existing social distancing protocols. It will be interesting to see not only new leadership falling into place over the next months, but also a possible new structure of how the Legislature meets during these trying times.