Let's Get Technical
By Marc Mignault on 06.20.2022
Posted in Nuclear Energy 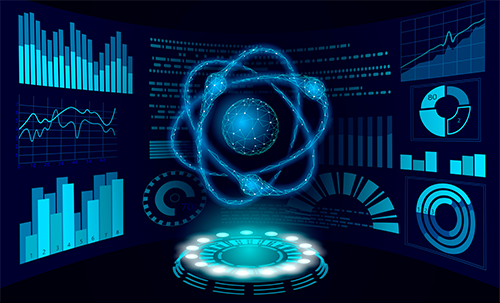 Nuclear energy has been around commercially in the United States since 1958 and even began commercial operations directly on West Virginia’s doorstep, right on the Ohio River at the Shippingport Atomic Power Station in Beaver County, Pennsylvania. However, over the last 64 years, nuclear energy has gone overwhelmingly misunderstood and the nuclear energy we see today is far more advanced, much safer, and increasingly becoming the most cost-effective form of energy.

The commercial nuclear reactors in the U.S. – also known at the U.S. nuclear fleet – are generally 1,000-Megawatt electric (MWe) light water reactors. This means they are all cooled and moderated with ordinary water, and they generate electricity by boiling water to create steam which turns a turbine to power a generator. This technology was developed in the 1950s. The U.S. nuclear fleet is currently the largest in the world, with 92 reactors operating in 28 states. Twelve states currently rely on nuclear energy for at least 30% of their electricity generation, including Pennsylvania, North Carolina, Virginia, and Tennessee.

The U.S. nuclear fleet operates at an average capacity factor of 93%, which means our nuclear reactors run at full capacity 93% of the time. This is far higher than any other form of energy generation, and is a capacity factor that nearly doubles that of natural gas and coal. According to Appalachian Power’s utility data for West Virginia, capacity factors dropped between 2017 and 2020 from an average of 54 percent to 40 percent for the John Amos Power Plant and from 62 percent to 46 percent for the Mountaineer Power Plant. This means these West Virginia power plants had to run more than twice as long as a nuclear power plant, using more fuel and creating more waste to reach similar outputs.

Currently, approximately 20% of America’s electricity generation comes from nuclear energy; nuclear energy is the country’s largest source of carbon-free electricity by providing 50% thereof; and nuclear energy is by far the densest form of energy – meaning it produces the most energy from the least amount of fuel, all while also requiring the least amount of land to do so. A nuclear fuel pellet (approximately 3/8-inch in diameter and 5/8-inch in length) provides the same amount of energy as one ton of coal, 17,000 cubic feet of natural gas, or 149 gallons of oil. For comparison purposes, to power the average American home for approximately 4 years, it would only take around 2.2 lbs. of nuclear pellet fuel – it would take about 31,000 pounds of coal to do the same.

As energy prices spike, and energy security has become a necessity, the Department of Energy and the country is finding out just how vital the U.S. nuclear fleet is to maintaining baseload energy for the grid, as well as doing so efficiently and on a carbon-free basis. That is why the DOE is heavily funding the maintenance of the existing fleet and the development of the next generation of reactors to come. While the next generation reactors are innovative, smaller in size, and leading the nuclear industry into a revitalization, the technology is generally based off of proven technologies from the 1950s and 1960s, much like the existing nuclear fleet is.

The next generation of reactors are advanced reactors, and most are being developed in a smaller format known as small modular reactors (SMRs). Small modular reactors are advanced nuclear reactors capable of up to 300 MWe; there are also microreactors which are capable of 1-20 MWe. SMRs and microreactors are a fraction of the size of conventional nuclear power reactors, require far less land for the site and surrounding planning zones (if any), and many are built in factories and transported as a unit to a location for installation.

SMRs are designed to produce electricity, provide thermal energy, support microgrids, power industrial and manufacturing operations, and power clean energy processes such as hydrogen production, desalination, and direct air capture on locations not suitable for larger nuclear plants while requiring much less capital investment than bigger facilities. The new SMR designs also allow for the use of passive safety systems and advanced nuclear fuels. Passive safety systems mean that the reactors are capable of cooling and stopping the fission reactions naturally in order to stop overheating or meltdowns from ever occurring and require little or no electrical power to operate and provide cooling if an accident were to occur. Similar to smaller reactors on nuclear submarines, SMRs with passive safety systems can be installed underground or aboard ships or sea platforms where they sit below the water line, and the surrounding water shields them in the same way.

SMRs’ passive safety systems are largely made possible due to new designs utilizing natural convection and gravity coolant feed, as well as the use of advanced nuclear fuels designed to disallow the potential for overheating or melting. These advanced fuels include Tri-structural Isotropic Fuel (TRISO). Essentially, TRISO fuel is made of poppy seed-sized particles consisting of uranium, carbon, and oxygen sealed in three layers of indestructible carbon and/or ceramic materials. These particles are formed into billiard ball-sized spheres called "pebbles” or cylindrical pellets. The DOE has said that “TRISO Particles are the most robust nuclear fuel on earth.” This robust fuel won't melt in the reactor, which can run at higher temperatures, allowing more efficient electric and greater thermal energy outputs. The pebbles can also be circulated in the reactor, with spent pebbles removed from the bottom while fresh pebbles are put in at the top. This allows for more continued operation and longer life of the reactor overall.

Some of the advanced reactors are molten salt and similarly liquid metal cooled reactors (such as sodium and lead cooled reactors) which allow for natural safety through thermal density, so if the reactor core gets too hot, the fuel expands, causing the nuclear reaction to naturally slow and the reactor to cool. These reactors also provide the added benefit of being able to utilize spent fuel from other reactors as fuel for itself by utilizing fast-moving neutrons, thereby dealing with spent nuclear fuel in a positive and efficient manner. Molten salt reactors are also capable of being refueled while remaining online because the coolant and the fuel are the same, and the fuel is mixed into the fluoride salt.

There are many designs under consideration and numerous ones, such as molten salt and high-temperature gas-cooled reactors, are in advanced design programs funded by the DOE and look to reach completion in 2027 and commercial deployment soon thereafter. As the programs advance, partnerships are already being formed, supply chain agreements entered into, and deployment strategies made. Is West Virginia included in any of those? Now that the moratorium is lifted, is West Virginia looking into this? What could this mean for West Virginia?

Those are the questions I will be looking into and addressing in our next installment, so stay tuned! For additional information on our team and services at Bowles Rice, please check out our webpage, and be sure to follow me on Twitter @AtomicAttorney.