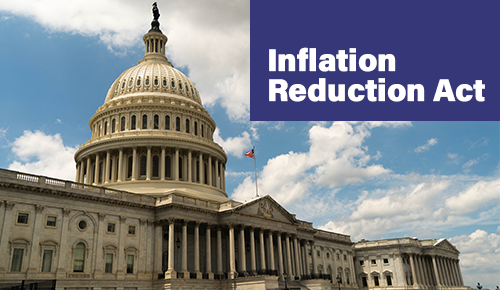 Under the Inflation Reduction Act (IRA), touted and proposed by U.S. Senator Joe Manchin (D-W.Va.), the government would provide much needed and sought-after relief and incentives for nuclear energy.

The IRA’s Nuclear Production Credit for existing nuclear plants would be included in IRS Tax Code 45U.  The credit for existing nuclear plants starts with 3 cents ($0.03) multiplied by the kilowatt hours of electricity produced and sold by the plant. This credit is reduced if the 0.03 x kWh exceeds the “reduction amount” which is calculated at 80% x [gross receipts from any electricity produced - (2.5 cents x kWh’s)].  The 3 cent and 2.5 cent factors are also to be adjusted for inflation moving forward for the years in which sales occur.

Should the qualified nuclear plants ensure that laborers and mechanics – who are employed by contractors in the repair or alteration of their facility – are paid wages at or above prevailing rates for alteration or repair of a similar character in the local area of the facility as most recently determined by the Secretary of Labor, then the production credit will increase by a factor of five. This increase creates a credit of $15 per megawatt-hour for electricity produced by existing nuclear plants. The credit gradually declines as power prices rise above $25 per megawatt-hour. Should they not meet the wage requirements, the base credit stands at $3 per megawatt-hour.

Advanced reactors, such as small modular reactors (SMRs) or those using advanced technologies, are excluded by the IRA from receiving existing plant credits. Advanced reactors and SMRs are provided for under the IRA as discussed below.

Calculations by research firms suggest that the production credit for existing plants could provide up to $30 Billion to save dozens of nuclear power plants from early retirement. This funding is in addition to the previously announced $6 Billion Civil Nuclear Credit Program, which was contained in the bipartisan Infrastructure Bill passed in November last year. The IRA assists nuclear reactors in order to level the playing field in electricity generation, to keep as much at-risk electrical capacity on the grid to fend off an energy crisis (as seen in Europe), and to continue decarbonizing the grid. Nuclear energy remains the largest carbon-free energy source in the U.S. at 50% and provides approximately 20% of the country’s overall electricity.

The IRA provides tax credits for both production and investment for advanced reactors generating electricity, which would be included in IRS Tax Code Section 45Y and 48D, respectively.

Advanced reactor facilities that qualify for production or investment tax credits may only benefit from one, the production credit or the investment credit, but not both.

The advanced reactor production credit is 0.3 cents multiplied by the kWh base rate for 10 years and starts in 2025. Energy communities, including coal communities which are new, will receive 10% on top of this credit. The advanced reactors which qualify for this production credit are those which generate electricity, come into service after December 31, 2024, and which emit a zero greenhouse-gas emissions rate. The production credits will only be provided to qualified facilities for 10 years starting when the facility is placed into service.

The investment credit is 6% for most generators, but it can provide a much larger 30% credit for units producing less than 1 MWe, which is focused specifically on microreactors. The facilities which qualify for the investment credit are similarly defined as those under the production credit, and the period for the credits is the same as well.

There is $100 Million to make HALEU fuel available for research, development, demonstration, and commercial use; $500 Million to make HALEU available for the first advanced reactors from the U.S.’s uranium stockpile that is currently being formed, determine HALEU amounts needed for commercial HALEU markets in the U.S., and create a group to support the availability of HALEU for commercial use; and $100 Million to assist commercial entities in the licensing and regulation of special nuclear material fuel (such as HALEU) fabrication, enrichment facilities, and transportation packages.

These provisions will also allow the Nuclear Regulatory Commission to better modernize their regulations and certifications for HALEU commercially.

The IRA also appropriates $150 Million to the Department of Energy’s Office of Nuclear Energy (ONE). This funding is available through September 30, 2027, and allows ONE to assist advanced reactor projects, oversight of the existing nuclear fleet and infrastructure, and meeting environmental and national security needs.

This will be something to keep an eye on as the IRA only remains proposed legislation and is subject to change. The IRA represents a compromise between Senator Manchin and Senate Majority Leader Chuck Schumer (D-NY). This legislation will have to first pass the Senate and then the House of Representatives.

However, it appears to be gaining support now with the recent backing of U.S. Senator Kyrsten Sinema (D-AZ). Keep your eyes on this one!

For additional information on our team and services, please check out our firm's Nuclear Energy webpage and be sure to follow me on Twitter @AtomicAttorney.