Appalachia Can Provide US Energy Security
By Marc Mignault on 08.04.2022
Posted in Nuclear Energy 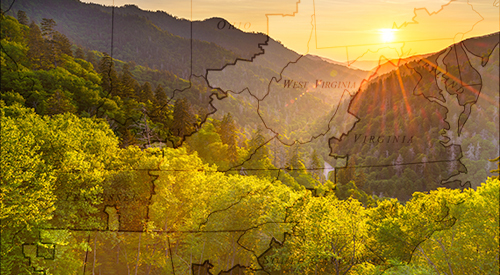 The reason nuclear energy brings energy security to the US in particular is because we have the capability of creating the entire nuclear lifecycle here at home. We have large uranium deposits to mine; we are building a uranium reserve; we can purchase uranium from friendly nations such as Canada, rather than being reliant on Russia; we have conversion and enrichment facilities; we build reactors and SMRs; we have the workforce to operate the reactors; and we have all the necessary supply chains which will support many states and multiple industries. This allows the US to not be subject to supply shocks when strife arises, as well as allowing us to be able to meet the consumer and industrial demands when other energy sources might slow or need maintenance.  This is why an all-of-the-above strategy is vital to our country, West Virginia, and the surrounding region.  Rather than be at the whims of whipsaw markets where prices rise for one energy source, we will have the ability to utilize multiple energy sources to provide reliable and affordable energy and jobs at all times.

But is the United States making additions and transitions to nuclear energy? How far along is the US? Is Appalachia involved? What does this mean for the Appalachian states? Let’s take a look.

United States – The US is completing the Vogtle 3 and 4 reactors in Georgia, which are set to come online in 2023. On August 3, 2022 the Nuclear Regulatory Commission authorized Southern Nuclear Operating Company to load fuel and begin operating the Vogtle 3 reactor. Following the Vogtle reactors, the US currently has two large reactors planned in Florida, the Turkey Point 6 & 7 reactors; and the first SMRs from NuScale are scheduled to be completed and begin operation in Idaho in 2029. Additionally, the US has 7 large reactors and another 11 SMRs proposed. The US will also have other DOE SMR demonstration projects, such as the X-Energy project in Washington, the TerraPower Natrium plant in Wyoming coming online in the next 7 years as well, but the earliest SMR project to be completed is the BWXT microreactor which will be provided to the Department of Defense for operation in 2024. More on that below.

With a broad, country-wide view in hand, let’s take a closer look at what is happening around us in Appalachia to see who is looking to build up their energy portfolios, bring jobs and revenue to their states, and help Appalachia remain a vital part of America’s energy independence.

I am glad to see so many states in Appalachia embracing nuclear for the many benefits it provides and how it can help secure our energy needs and revitalize our communities. Nuclear energy can bring safety, security, and independence to the country, the State of West Virginia, and our surrounding region when we need it most.

For additional information on our team and services, please check out our webpage, and please be sure to follow me on Twitter @AtomicAttorney.